LANSING, Mich. – Michigan schools are taking the initiative to build healthier school environments as part of the Michigan Health and Wellness 4 x 4 Plan. In recognition of these efforts, the Michigan Department of Health and Human Services (MDHHS) and Governor Rick Snyder are recognizing 38 Michigan schools for fostering healthy eating, physical activity habits, and tobacco-free lifestyles among students.

“Thanks to the schools recognized today, 17,000 students have been impacted by positive changes made in their school environments,” said Nick Lyon, director of the MDHHS. “When Michigan schools promote healthy lifestyles, it helps reduce childhood obesity and encourages children to adapt their healthy habits that improve their future health outcomes.”

The Michigan School Wellness Award program is part of the Governor’s Health and Wellness 4 x 4 Plan. MDHHS, in collaboration with the Michigan Department of Education, the United Dairy Industry of Michigan, Blue Cross Blue Shield of Michigan, Michigan Action for Healthy Kids, and the Healthy Kids, Healthy Michigan Coalition today recognized Michigan’s award-winning schools at a special ceremony at the State Capitol.

Schools that have achieved all of these elements are recognized with the top level Gold award.

This year’s winners laud such achievements as physical environment changes to encourage healthy eating, farm to school programs and school gardens, increased opportunities for physical activity and nutrition education for Staff. The winners of this year’s School Wellness Awards include:

To apply for the program, schools provide information about nutrition, physical education/ activity, and tobacco-free practices and submit at least one success story.

To view school award winners and learn more about the School Wellness Award Program and other resources available for schools, please visit www.mihealthtools.org/healthyschools.asp.  For more information about the Michigan Health and Wellness 4×4 Plan, visit www.michigan.gov/healthymichigan.

It was a three-cake day.  On Tuesday, May 3, 2016, Allendale High School staff, students, and seniors celebrated plans for the future on Decision Day. Across the country, early May means decision time as high school seniors commit to colleges, the military, travel or mission plans—or take steps to enter the workforce. At the high school, seniors were greeted on Tuesday morning by staff wearing their college colors or a shirt that reflected their workforce choices. 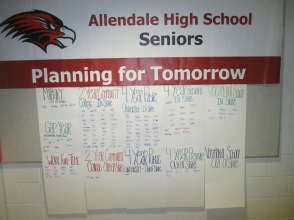 A highlight of the day was the opportunity for seniors to register their choice on Decision Day posters.  Future paths of the Class of 2016 look like this: 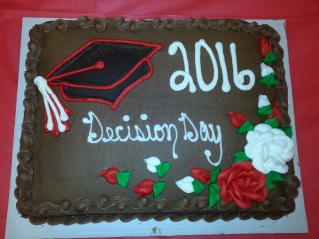 For those who completed a Senior Survey and Free Application for Federal Student Aid (FAFSA), drawings were held for gift cards to Bed Bath & Beyond, Barnes and Noble, Starbucks, Meijer, and more.  Other giveaways included collegiate t-shirts, a College Care basket, a $250 Amazon gift card, and a mini-refrigerator.

During the lunch hour, seniors and staff celebrated at the cake reception.  The day wound down as Principal Dan Remenap held an all-senior meeting to highlight the schedule as Graduation, on May 26, 2016, draws near.

It was a great day for looking back, and especially for looking forward. Secretary to the High School Principal and Guidance Department, Ms. Kristin DeGroot noted, “We had almost everyone participate.” And, at the end of the day—there was no cake left.  Congratulations seniors!

Allendale Public Schools special education students will benefit from a gift given by the Knights of Columbus Council, St. Luke University Council 14586, Allendale. Chairman Howard Lehti, left, presented the $1,284.06 check to Dr. Daniel Jonker, the Superintendent of Allendale Public Schools this week. The Knights of   Columbus conduct a fund drive each year to help support education of those with special needs. 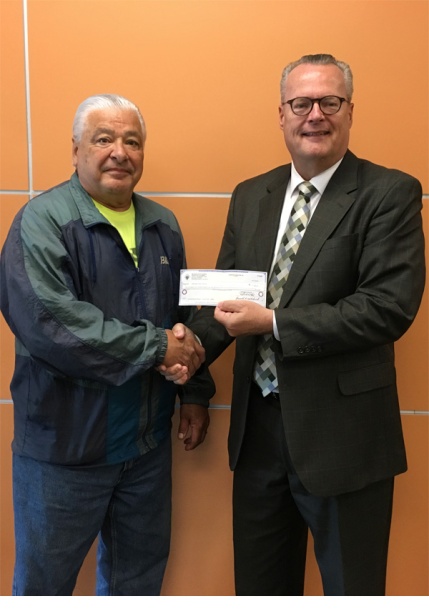 Posted on May 4, 2016 by allendaleoutlook

Congratulations to the middle school team on an awesome job at the State Science Olympiad competition at MSU recently. Out of the 350 schools that started out, 48 schools qualified to compete at MSU.   Allendale Middle placed 11th and received a plaque for their efforts.  The competition was extremely tough with some of the best school in the state competing.  But that did not stop this outstanding group of aca- demic achievers in performing their best. 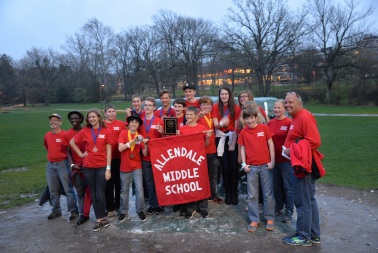 Back to the Future: Allendale Seniors Aim High

Posted on April 29, 2016 by allendaleoutlook

Rocket science, theatre, industry, and epidemiology, Allendale Public Schools marks Decision Day on May 3, 2016, with a graduating class that has high hopes for the future. Whether moving into higher education or into the job market, Allendale high school seniors have big plans. We caught up with several seniors to ask about their path after graduation:

♦ Senior Hank Snyder was awarded acceptance to the Caterpillar ThinkBig program with a scholarship to develop specialized expertise with heavy equipment in a dual-site, two-year program. Mr. Snyder will obtain accelerated CAT-Certified training and higher-level entry into the workforce. Hank credits the Careerline Tech Center with helping him prepare, and apply, for the  scholarship he received. Hank gained work experience in his junior year at Morrison Industrial Equipment, and co-op experience as a senior. Hank noted that the opportunity to work toward his interests, while still in high school, set him on the right path to a bright future.

♦ Erin Sickrey, named a University of Michigan Shipman Scholar, will attend that institution with a focus in communications and screen arts. An invitation-only opportunity for incoming freshman, the Shipman Scholar program recognizes achievement in the creative and academic arts, as well as leadership. Ms. Sickrey was one of only 37 recipients of the honor selected from the incoming class. Working through the core curriculum at Allendale high school helped Erin understand the areas she does—and does not—want to pursue. Erin states her coursework, “helped me realize what I am not into,” and that college is the right path for her.

♦Troy Avink is another senior who gained valuable employment experience during his high school years at the Careerline Tech Center. With the help of Mr. Kole, Troy applied for, and gained employment with JR Automation, months prior to his graduation from high school.

♦ Graduating senior Morgan Johnston has previously garnered recognition for her achievements in theatrical production and commercial projects. Ms. Johnston recently won Best of Show in the Michigan Student Film Festival and plans to continue her studies at Grand Valley State University. Morgan credits the Media Communications class at Careerline Tech Center with nurturing her interest in the performing and commercial arts. Eager to learn her craft from the bottom-up, Morgan advises younger students that it is, “never too early to start working on your career now. Through Tech and classes, you can focus on your career—you do not have to wait for college.”

♦ It was a middle school Science Olympiad subject that set Carrie Lammers on her path toward a graduate degree in  epidemiology or public health. Competing in Disease Detectives, and other Science Olympiad topics in high school, helped Ms. Lammers develop her interests, leading to a weeklong job shadow at the Centers for Disease Control and Prevention (CDC) in Atlanta, during the summer of 2015. After graduation, Carrie will be heading back to the CDC as a program counselor and  hopes one day to work there. Carrie was awarded a full scholarship to Eastern University to continue her studies. Crediting Color Guard and Band, Carrie also notes her appreciation of Mr. Silveria, noting “AP Bio was more than just cells, it was about work ethic.”

♦ Although named a Shipman Scholar at the University of Michigan, Sam Austin will instead continue his studies in aerospace, astronautics, and electrical engineering at the Massachusetts Institute of Technology (MIT) in Cambridge. Mr. Austin was also named a National Merit Finalist and Scholar. Sam’s initial interest in rocket science was piqued in the second grade, when he participated in a school enrichment course that introduced him to the Apollo space program. As Sam notes, “from then on, I have been fascinated by rockets, space vehicles, and spaceflight, past and future.” Sam credits his environment with nurturing his curiosity, noting “living in a small community has afforded individualized attention and opportunities not available  anywhere else.”

With a mission to challenge students to reach their highest potential, the Allendale Public School District recognizes all its seniors on Decision Day, as they continue their education, further develop their skills, or move into the job market.

Allendale Technology In The News

Posted on April 22, 2016 by allendaleoutlook

Technology Director Paul Mulder
Chromebooks in the classroom: Toy or transforming how our students learn?
What happens when you put a computer into the hands of every child? Transformation.
RAPIDGROWTHMEDIA.COM

Posted on April 4, 2016 by allendaleoutlook

For additional information-click on graphic above.

Posted on March 25, 2016 by allendaleoutlook

Posted on March 18, 2016 by allendaleoutlook

Thank you to the APS Foundation for awarding $1477 in teacher mini-grants to enhance student learning.

Congratulations to the following teachers:

Posted on March 10, 2016 by allendaleoutlook

The TriSonics APS High School Robotics team had a very successful weekend competing at the Waterford District Event. – In qualifying, they placed 29th out of 39 teams.  They were then selected by the #1 alliance (FRC Team 67 – HOT, and FRC Team 33 – Killer Bees) for the elimination matches.  Their alliance was able to set some great scores and they came out of the elimination rounds as the District Winning alliance.

Highlights for the event:
– 29th in Qualification
– Selected on the #1 Alliance
– Winning Alliance for the event
– Received the Innovation in Controls Award
-Another highlight for them was to receive the team issued award for robot design and sportsmanship.

If you would like to see the team in action, they will be competing next at the West Michigan District Event at Grand Valley State University  on March 25-26.