Posted on November 13, 2012 by allendaleoutlook 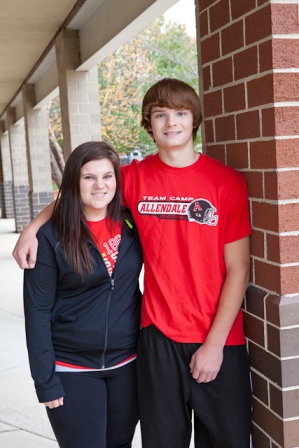 When Hanna and George Ebeling submitted their applications to TESA, they never anticipated the experience that awaited them.

The Grand Rapids Teen Entrepreneur Summer Academy invites students to learn about business models and create a viable one of their own as they compete for award money and recognition from members of the local business community.

“During the five day academy, teams of three to four students from different schools will manufacture an original business pitch from the idea stage to a developed concept. They will participate in lectures and hands-on learning sessions along with creative problem solving tasks. On the final day, each team will present their idea to a panel of local business professionals for a chance to win cash prizes totaling $1,000!”  (source)

Held this past July in conjunction with Grand Valley State University’s Center for Entrepreneurship and Innovation, Hanna (AHS Senior) and George (AHS Freshman) were challenged with creating a business that would spur urban development and encourage people to make purchases locally.

After being placed in groups of 4-5 students from all over Michigan, Hanna’s team settled on creating a “green” coffee shop for GVSU that would feature a multicultural menu, organic food, and an internet café. Working together, her group created a powerpoint that earned them a spot in the competition finals.

George was placed in a team that decided to showcase produce from local farmers. Named “Urban Organics,” his group came up with a business model that would allow people to buy crops from area farms and have them delivered to to their home or place of employment. This idea won their team a spot in the finals, and in the end, the $1,000 cash prize to be shared among group members!

George shared that his biggest takeaway from the competition was learning about something completely new that had such practical real-world applications. He enjoyed pitching the team’s idea to the judges, working with mentors, meeting other students, and using tools like Prezzi to create a winning presentation.

For Hanna, the joy and the learning came not as much from the program itself, but from meeting so many other interesting people.

“It was actually a challenge to get to know people who were quite different from me–especially being in a very diverse setting that is unlike anything I’m used to. Getting the courage to approach someone who you do not know and may not clearly understand was hard for me, but it was definitely a good thing!”

We congratulate both Hanna and George for stretching themselves, for taking new risks, and for their success in TESA this summer!